In the late 1800’s golf courses were being established all over Scotland and in 1895 the financial community set up the Insurance & Banking Golf Club at the Duddingston estate.

The land, part of a former deer estate, has many links with Scotland’s history including in 1745, prior to the Battle of Prestonpans, the encampment of the cavalry of Charles Edward Stuart, Bonnie Prince Charlie, in an area adjoining the course and known today as Cavalry Park.

Owned by the Duke of Abercorn the estate was set on the east flank of Edinburgh, beneath the spectacular backdrop of the 823 feet high extinct volcano Arthur’s Seat. The area was considered by the club’s founding architect Willie Park to be of a size that would make a “first class course”. Well over 100 years later those that have been fortunate enough to play it would surely agree. The course was extended in the 1960’s and 1970’s by John Shade and Bill Biggar and, with the addition of the new tee at the 12th hole, now measures 6525 yards – a true test of golf.

The gently undulating parkland course (in Gaelic Duddingston means ‘sunny side of the hill’) is maintained to a high standard throughout the year and is considered one of the most outstanding parkland courses in the Lothians.

Originally formed in 1895 as The Insurance & Banking Golf Club, Duddingston differs from most golf clubs, as it was born out of a competition rather than a district.

Prior to 1895 the Edinburgh Insurance Trophy was played for by the numerous insurance companies based in Edinburgh. This led to them acquiring their own course after they had invited the banking community to join them. Land was leased from the Abercorn estates and two time Open Champion Willie Park Jnr. was engaged to lay out a fine course at Duddingston which lies at the foot of Arthur’s Seat only three miles from the centre of Edinburgh Scotland’s capital city.

Shortly after the course opened there was an exhibition match staged between professionals Willie Auchterlonie (who won the Open Championship in 1893) and Ben Sayers who took on British Amateur Champion Freddie Tait and his partner Leslie Balfour Melville. Michael J, Brown, the celebrated golf artist painted the scene (see pic above).  An enlarged replica of the scene can be found when you enter the British Golf Museum in St. Andrews. The original painting hangs in the Atlanta Athletic Club in the United States.

Duddingston Golf Club will always be associated with Ronnie Shade, Scotland’s greatest amateur golfer and one of Great Britain & Ireland’s best amateur golfers of all-time. For a period in the mid-1960's Ronnie was considered the best amateur in the world.  Ronnie was awarded an MBE for services to golf in 1967 aged just 28.  His record is second to none:

Duddingston’s  ‘Fervour for competitive golf’ as one Duddingston Captain put it, has run through the Club since its inception and still exists to this day. One only has to look at the record to verify this:

9 times Edinburgh Summer League Champions (more than any other club).

*Ronnie beat Arthur Hanley, another DGC member in the final

Duddingston has had five winners of the Lothians Boys Championship.

In the 1960s &70s many believed the hardest tournament to win apart from the Lothians Golf Championship was the Duddingston Golf Championship such was the quality of golfers. The role call certainly substantiates that view. Included in the list of winners are Walker Cup player W.B.Torrance (1912) and two  Scottish Amateur Champions Robin Wight (1947, 48 & 53) and R.D.B.M. Shade (1955, 56, 60, 62, 64).

MULTIPLE WINNERS OF THE CLUB CHAMPIONSHIP

Over the years, Duddingston has had many great golfers who have won the club championship multiple times.

Many of the great figures in golf have tread Duddingston's fairways. Between them are sixteen major winners, fourteen Open winners plus Horton Smith who won the U.S. Masters twice.

Horton Smith played in an exhibition match with Henry Cotton in 1946 wearing his army uniform in a game that also featured the Duddingston member Robin Wight and A.J.D. Blaikie.

Not many clubs in the world can claim to have members who went on to be Captains of the Royal & Ancient Golf Club.  Duddingston has three: 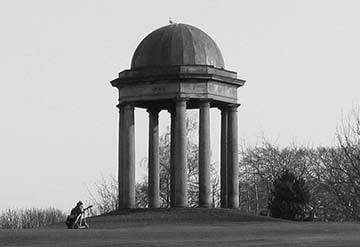